I had such a great time at The Big Bead Show!  It was a complete whirlwind and travelling down and back in a day was exhausting but definitely worth it!

I first had to demonstrate how to make the Daisy pendant below.  I hadn't realised I was going to be "miked up" and have a TV screen and camera pointing at my hands (why I didn't realise that I'm sure not) so that was a surprise!  I was worried that nobody would be interested in watching metal clay as, after all, it's a bead show BUT I started setting up and there were about 10 people sitting waiting for me to start and by the time I had got going, I looked up and every seat was filled and there were loads of people standing - eeeeeeek!  No pressure then!

Actually I loved it and my daughter said that the camera angles were good too - something I'd forgotton about as I was demonstrating, so just as well!

Then I packed everything up (with my little helper) and had time to catch a quick coffee before I had to set up for the "Meet the Tutor" section.  I met lots of lovely people who stopped by to look at my work and there were some great questions.  It was thoroughly enjoyable.

I've been asked to submit proposals for next April and October (2016) and there's a possibility that I'll be holding workshops as well so I've been busy thinking through ideas and trying them out in polymer clay (first) and then metal clay (after). 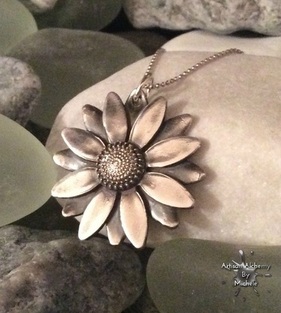