As you know if you read my blog regularly, Father Christmas aka my husband(!) bought me a Paragon SC2 kiln for Christmas.  I love my little "starter" kiln so I thought it would be fun to do a review and compare them both.

Here, my little starter kiln wins hands down!  I bought mine, an R14-S, in early 2015 from www.technicalsupermarket.com for £145!  It was a reconditioned kiln that had only been used once or twice but new, the kiln was still only £234 which is a fabulous price for a kiln.  Technical Supermarket are now selling updated models, the R14-U for £274 and the R14-L for £299 - so still very very competitively priced for a metal clay kiln.  A Paragon SC2 costs in the region of £605 for a basic model with no window or internal shelves, rising to over £700 for doors with windows or bead doors and shelf kits.  So buying a kiln is not for the faint hearted!  This is a definite win for the R14-S.

The Paragon SC2 has a lovely finish and you can buy it in different colours (at a cost) from some suppliers.  The blue enamelled casing does look neater than the unfinished metal of the R14-S.  The R14-S (as you an see from the pictures), has spalled (discoloured from heat) on the outside in places BUT this is purely superficial and nothing to worry about.  A win for the Paragon SC2.

Both kilns have the same upper temperature so we have a tie in this category.  Interestingly, there's not much different in how quickly they reach the firing temperature either.  The Paragon SC2 took just under 20 minutes to reach 800 degrees and the R14-S took about 16 minutes.

The Paragon SC2 has an automatic timer which means you can leave the kiln to do it's thing, confident that it will switch off at the end of the cycle.  I know some people like to fire overnight when they're in bed and allow pieces to cool in the kiln for the morning but I'm not confident of doing that yet but I can see how it's an advantage.  The R14-S doesn't have a timer so you have to make sure you make a note of the time and go back to switch it off.  Both have electronic controls (very easy to use in terms of the R14-S and completely confusing for the Paragon when using their instructions first time round - the instructions could be much clearer and so I had a few issues and headaches trying to get my head arouond it)!  Having a timer is a definite advantage so it's a little thumbs up to the Paragon.  Would have been a full thumbs up if the instructions had been clearer!

The only reason I needed a "bigger" kiln was for running workshops where there's a need to fire numerous items at the same time.  Most small kilns have very tiny internal chambers and wouldn't be suitable.  However, the R14-S, although a small kiln, has the advantage of a much larger chamber than most "mini" kilns on the market.  I've fired 12 pieces at once in it!  The internal chamber of the Paragon SC2 IS bigger but, as you can see from the photos, the R14-S has two slide in shelves which I love.  The Paragon SC2 uses much chunkier shelves and you have to stack them on small kiln feet.  The shelves and feet are around £25 upwards and I will need to buy another set so I can have a shelf stacking system.  I have to say that I don't like having to stack shelves on kiln feet but I'm sure I'll get used to it.  So for size, the Paragon wins but for niceness (not sure that's a word), I'd opt for the R14-S - so again we have a tie!

As you can see from the internal pictures, the heating elements on the Paragon SC2 are hidden inside the kiln walls.  On the R14-S they are visible at the back of the kiln (a bit like a toaster).  This has positives and drawbacks.  Being able to see the elements means they're easy to change (you may have to do this once in a blue moon) but the downside is that you need to be careful that nothing touches the elements when the kiln is firing.  So if you're using a firing box (the type you make from a toughened foil sheet), you have to make it slightly smaller than the directions state.  Also if you're loading the kiln with lots of items, you need to make sure that they're not right at the back of the shelves.  Having not had to replace the elements, I'm not sure how difficult a job it is to change them when they're hidden.  I suspect however that having them hidden does have advantages so this is a win for the Paragon (but wouldn't be a deal breaker for me for the smaller kiln).

External Heat When In Use:

The Paragon is amazingly cool when in use!  The sides, back and front (and I think bottom) were only mildly warm to the touch.  There does appear to be a small amount of heat from the top of the kiln BUT it's still minimal.  The R14-S isn't cool and does get quite hot and I wouldn't want to touch it when in use but on a ceramic tile it hasn't affected the worktop where it lives.  This is a big plus for the Paragon and also a surprising one - I never thought I'd be able to touch (gingerly) the outside of a kiln in use (by the way, please don't do this).

I'm not sure if Paragon have revised their kiln doors but the one I have is literally a "push shut" type.  There's no actual locking mechanism.  On my first fire, the door actually opened by itself (or I hadn't closed it properly) but either way it gave me a bit of a fright.  Thankfully it only opened a fraction and didn't ruin the pieces in the kiln but there is a section on this in the manual so it must be something that can happen.  Not sure if I like that :(  The R14-S on the other hand has a sort of clip over type of locking mechanism (see photo below) which is very secure AND it has a fail safe operation so the kiln won't work with the door open - something the Paragon doesn't have and would benefit from.  So all in all, this is a win for the R14-S.

This is another surprise for me.  The little R14-S is silent.  Never moans or groans!  HOWEVER the Paragon SC2 clicks as it's heating (or maintaining temperature).  It's not continuous but it is loud.  I suspect you get used to it but it drove me bonkers yesterday!  I've now used it 4 times and funnily enough may already be tuning it out.  Being generous I'll call this one a draw!

As you'd imagine, the smaller kiln is much easier to carry around, so far more portable than it's hefty big sister.  The Paragon SC2 is not lightweight so less portable than I thought it would be.  A win for the R14-S here.

If you're a metal clay user who has no desire to teach or load up the kiln with multiple items, then the smaller kilns from Technical Supermarket are a fantastic buy.  I would definitely opt for one of their kilns rather than the "mini" kilns you see elsewhere on the market purely because of the internal chamber size.  The downsides are that they're not pretty and don't have a timer so you have to be with it when firing.  I am definitely keeping my little one because I love it and it gives me consistent results.  For me however, the larger Paragon SC2 is needed as I will be able to get more inside it and having a timer is a lovely bonus.  It doesn't mean I love it as much as my little first kiln though!!!! 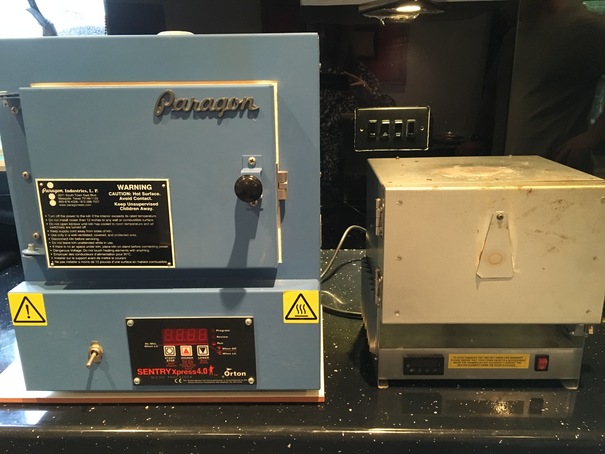 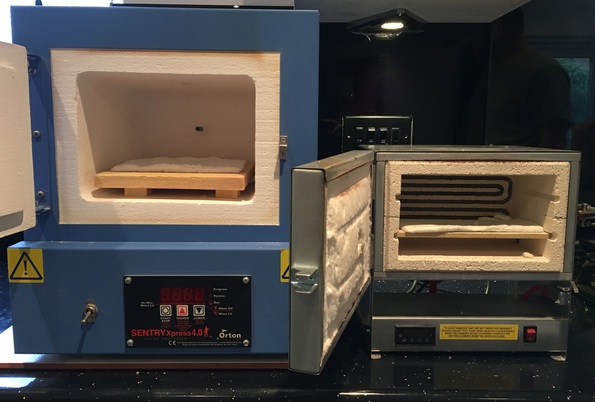 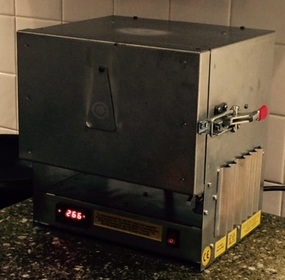